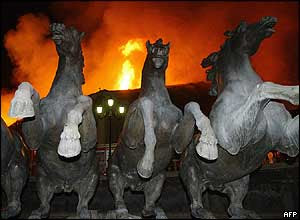 Putin wins a landslide and the Manezh burns down. I'm sure it's not an omen or anything...