Dohiyi Mir
In Which NTodd Says His Peace
Saturday, November 15, 2003
Go to the new DM blog.

The statement followed a meeting with the U.S.-backed coalition's civilian administrator L. Paul Bremer, who recently met with President Bush. He returned to Baghdad with new proposals for the council aimed at speeding up the transfer of authority to Iraqis.

The U.S.-led Coalition Provisional Authority will dissolve at that time, council authorities said in Saturday's news conference, and "the state of occupation will end."


Well, I guess they sorta listened to me.

PS--I'm taking bets on whether Chalabi (pictured below, happy man on the left) will be the strongman referred to by the CSIS: 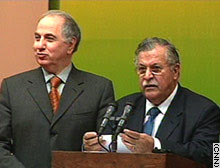